Creative Director Aaron Woods shares his thoughts on establishing a client base, paying your design dues, and getting the most out of stock images.

It’s October;  which means the air is crisp, the leaves are about to change, and during Octoberfest a love of craft beer’s is at an all time high.  Prospective clients perusing Minnesota-based Woulds Design are apt to discover several distinct takeaways: an animated logo that, alongside our other most-prized introductions, warrants watching every time it appears; a pixel-perfect pairing of typography and graphics; and Creative Director Aaron Woods’s embodiment of design “from the feet up.”

Aaron, it’s clear, is one of those right-brained folks whose success in graphic design was heavily foreshadowed by a lifelong attraction to art and design.

“As a child I was always interested in drawing and art,” says Aaron, who recalls creating graphics in MS Paint on his first computer before becoming hooked on Adobe Illustrator and Photoshop in high school.

Afterward, he attended art school (graduating with the honor of Best Advertising Portfolio), and took a job “paying his dues” in prepress production—which is where, he says, his education truly began.

Despite developing an award-winning portfolio in college, Aaron insists it took years of additional learning before he “could really be considered good at digital art.”

“The best thing a teacher ever told me was ‘I’m not here to teach you what to learn. I’m here to teach you how to learn,’” he says. “When I graduated art school, most kids did not get a job in the field at all. I got lucky and had a roommate who had a line on a job at a promotional products company, mostly putting customers’ logos on mugs . . .”

Far from adventure and excitement, he confesses, but precisely the right prescription for a budding graphic designer:

“It was exactly the kind of work I needed but didn’t know it at the time. In the graphic design world, unless you have naturally exceptional talent, you need to pay your dues. You need to learn that technical stuff that is horribly unsexy so you know why things are the way they are and what the limitations are of what you’re trying to do. I knew kids who got their first jobs at high-profile design studios and were in so over their heads that they just couldn’t make it and never got another design job after.”

His advice for aspiring designers, accordingly, is not to feel rushed. It’s tempting to go after dream jobs straight away, but the result can be creative burnout and a lot of turmoil from constant judgment.

Instead, patience is a real virtue—as the years he spent working for others on design teams helped him hone not only his design sense, but the business sense that prepared him to eventually go solo.

Freedom In Freelance (And Stock Vectors)

After years of part-time freelance, Aaron built up the clientele to go full-time with his design business. Taking the leap was “a mixed bag of terror and joy,” he says, but ultimately the sense of ownership over his designs and work hours proved irreplaceable.

Both his designs and work hours, meanwhile, have been strongly aided by his engagement with Storyblocks vector library:

“Most stock graphics I’ve used in my life have been images. For years it was very difficult to find vector graphics, and as one who specializes in vector, this led to issues while trying to find the exact things I wanted […] often I’d find an image but only want part of it, so I’d either have to redraw that part myself or ‘live trace’ the image and separate it, which isn’t easy.”

Since purchasing his annual membership, however, Aaron says he’s saved a great deal of time by eliminating the need to trace or start from scratch:

“My [Storyblocks] usage is almost exclusively vector-based. I rarely have a need for images now. I tend to only want to use elements of designs I download, so I’ll download a few different things and pull them apart in Illustrator and recombine what I need. The people who supply the vector graphics must be very good because the files I download are usually very well made.”

(Thanks, Aaron. We’ll pass that along!)

Word of mouth and social media remain his key sources of design clients; however, Aaron will occasionally employ entrepreneurial spirit when he sees a well-matched opportunity.

A self-described “beer snob,” Aaron recalls reading about a mobile bottling business in a Minnesota trade magazine—and, subsequently, noticing it didn’t have much in the way of branding:

“I contacted [the owner] and asked if he wanted some help with his graphics. He said he didn’t really want help for that mission but was thinking of starting a beer label focused on local breweries paired with local music.”

A few conversations and several GraphicStock vectors later, Aaron helped the launch of Tuned Beer with some epic retro labels: 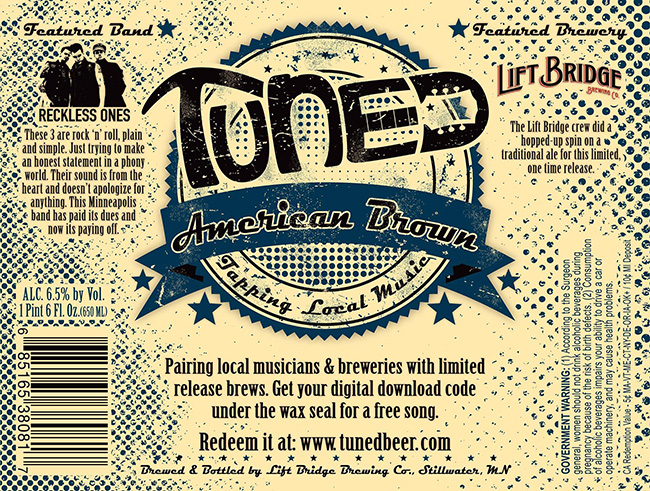 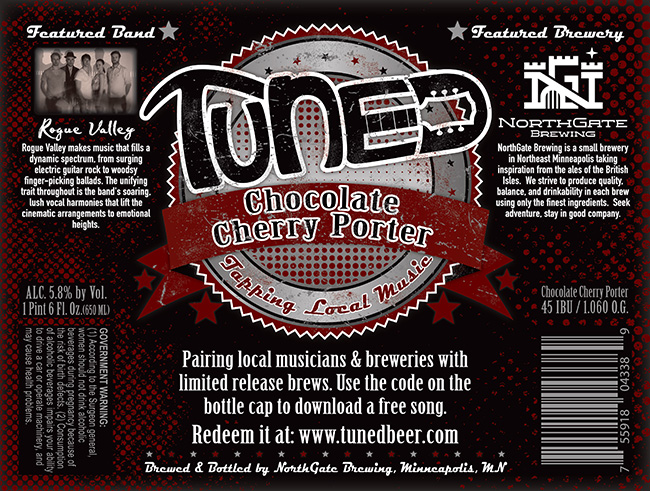 “Everyone wants that poppy 1960s to 1980s retro look,” says Aaron on his most frequent proposal requests. “It used to be grunge a few years ago, but you can see that style dying out.”

Specifically when it comes to craft beer, he adds, nobody wants to look too modern:

“Beer has such an old lineage, and craft brewers really want to highlight that they are the standard bearers for ‘real’ beer. It’s an ideal way to convey a certain reverence for the past while still being relevant.”

Storyblocks, explains Aaron, has become his “go-to source,” and not just for art—but for inspiration:

“There is such a breadth to the library that you can easily get inspired by just poking around. Their library has all but eliminated my need to ‘live trace’ images using Illustrator.”

This is why, of course, he never deletes any of his downloads. Storage is so cheap, he says, why get rid of them?

“I often find myself going back to files I’ve already downloaded,” he says, “so I keep all of my files on Google Drive for easy access anywhere.”

Visit Aaron’s Facebook page to see more of his awesome retro beer labels and other designs.